The world of mask opened up in an incredible way in Sri Lanka and I thought the power in which masks could work with archetypes was incredible. The world of masks is the world of containers that contain the sorrow; the pain projects an image to the group that reflects back the pain of the world. How does this happen? Like puppets, masks are made of dead materials. The dead materials comprise of paper, newspapers, coloured paper, streamers, theramocol etc. This mask is a suggestion to the person the world of darkness as one puts the mask on the face, the facilitator plays the music, and that is when the safety of the darkness also becomes the inner world of conflict. 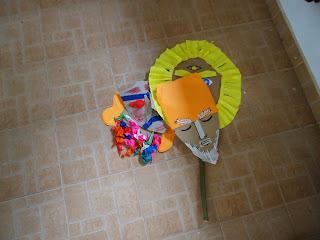 The body moves and the pain strangles within our world and in it the self expresses. In Sri Lanka the arts based approach towards mental health can describe the conflicted world of South Asia without threatening the individuals towards articulating difficult experiences. In Sri Lanka the Tamil and the Sri Lankans were present to this conflict and the world that could be disclosed may have been threatening. The world of metaphors and masks then contain the pain and the stories that emerge need not be sugar coated or expressed in all its brutality but it also can be contained by the masks, the puppets and the metaphors. This was clearly visible as the seven days worked with a clear design around metaphors, symbols and signs proceeded towards personal insights .  Let’s explain the phenomenon with what actually happened in Kandy where the experience took place.  It was an amazing experience that allowed the symbols and metaphors that articulated the inner world of the participants and their sorrows, and it  went beyond catharsis , it goes to become a container and a space from where deep reflection can take place . So we looked at the masks to represent the four quadrant of suffering as a path way to the inner world . The idea of the mask represents the expression of the four quadrant of suffering and that is how it was explained and introduced to the participants. The four quadrant of suffering are oppressor /oppressed the wound of loss, the wound of inadequacy,and the wound of inauthenticity. The participant had to express the personal suffering without words. the masks are also a suggestion that suffering can also betaken off as suffering can also be shed . For example three masks were kept in the centre of the room. The masks are made brown paper and the masks do not denote any expression except that that they form a human face. They were kept on the floor with a red cloth around it. They were used with background music for creating/facilitating a certain mood; and drums to express the suffering of the four quadrants. The participants could use all the three masks with the red cloth covering their head; they could use the other two masks on their hands. They could swirl around using the mask, dance, do movements and the muffled sound would be expression of the pain. The performance of pain would be as much as the individual wanted to prolong with the  performance. The mask because of its neutrality and being the cover becomes the container of the participant’s pain. The mask itself lying on the ground with lit candles evoked a reaction from the participant’s. They all watched it on the floor with fascination. It became a projection of one’s mind. Some said the masks are alive and that they are moving. One also said the masks are alive and they are talking to me. It could bring an expression of the pain because of its human resemblance and it being dead only brought alive with human expression. 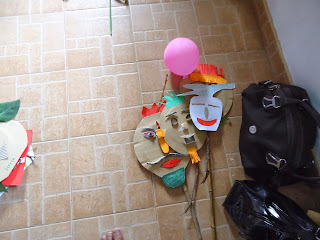 There were certain participants who did not venture out to express themselves. There were certain people who cried and cried within the mask as it later was soggy, with the tears. once the performance was over, the audience watching had to say statements starting with ‘I’ to express what they saw like ‘I have gone through a lot of struggle and now I am alive’. The stating of the unstated brings out unexpressed aspects of the individual sitting in the audience. It allows the participant’s to observe and express their own feelings and this projection is contained by the masked performance. This is what happened; there was a continuous collective expression of pain. All through this simulation by performance and observation were included in this creative expression of nonverbal, physical movement of suffering. There was a collective huddle of expression of sound by all the participants. The participants gathered around and evoked a sound which was beautiful and tender. 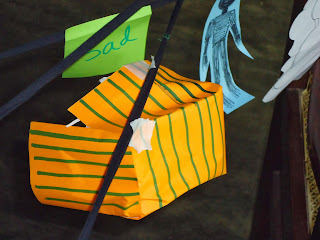 The four quadrants of suffering and the four false refuge were later explained. The false refuges are religion, work, sexuality (relationship), and intoxication; it was clarified that the tendency would then be to take false refuges like the mask of the warrior, the lover, the visionary, the ascetic, the hermit, the seeker, the orphan/teacher. In order to illustrate the mask making with the refuges we got the participants in the next round of exercise's  to make their own masks of these four heroes who are also connected to the four forms of suffering.  Mask making- With dead material, objects, thick paper, four masks are made, which are decorated with various materials collected from the outside. The four masks are the four heroes.The four archetypes that make us survive, the pain, the suffering, the heroes that give us the gifts. Keeping this in mind, the masks were made. The making of the four masks using cardboard, using paper, using objects from nature, going out and catching shadow on paper, and then cutting out the patterns and placing it on the mask was all a part of the healing process. They are the archetypes which evoke the will of going through the suffering that makes the individuals plough through the suffering. Through manoeuvring's and exploring with the masks, we enter with the masks into the four spaces and dance in each space of the quadrant collectively. Understanding the relationship the quadrant has with the mask; understanding one’s own connection with the mask and activating it, making it real. 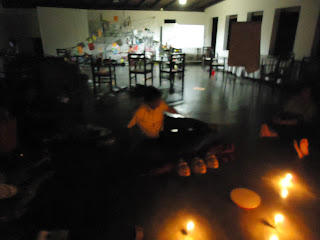 The use of mask in this therapeutic process brings about choosing pain and the conscious process of choosing the archetype of being a hero (a dynamic agency, a risk taker, a path). Each of these types have their wounds within them which was hidden from the participant .  The warrior has the wound of the oppressor /oppressed, the visionary has the wound of inauthenticity , the healer has the wound of loss, and the teacher /student has the wound of inadequacy. The process that began with dead material led to a process of exploration and eventual transformation. The journey was the movement from the house of suffering to the house of gifts given and received with the understanding of this journey .
7 views0 comments

The Journey of Expressive Arts in Conflict Areas

Children of war as the title denotes the work with children in conflict areas, those who are displaced internally by war , those children who are conflicted within by the political chaos that constant

The history of the edge

The history on this edge called valley or paradise is all about paradise interrupted because of a historical transmission of pain. It’s a place where the understanding of PTDSD is rarely understood by